Secret Russian weapon could wipe out NYC, Boston and D.C. in minutes with a massive radioactive tidal wave 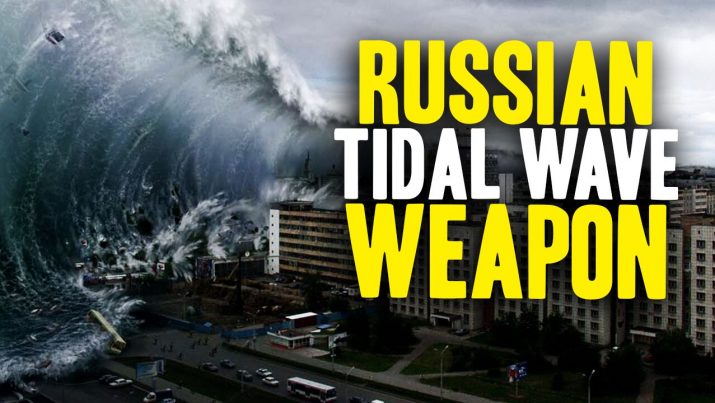 According to a high-level Russian source with ties to the military (named in the podcast below), Russia not only possesses a devastating secret weapon against the United States; they’ve already apparently put it in place off the East Coast shoreline.

The existence of this secret weapon — which could unleash a massive radioactive tidal wave that devastates cities along the East Coast — has been covered by the BBC in this article:

The Kremlin says secret plans for a Russian long-range nuclear torpedo – called “Status-6” – should not have appeared on Russian TV news. The leak happened during a report on state-run Channel One about President Vladimir Putin meeting military chiefs in the city of Sochi.

One general was seen studying a diagram of the “devastating” torpedo system. Launched by a submarine, it would create “wide areas of radioactive contamination”, the document says.

The “oceanic multi-purpose Status-6 system” is designed to “destroy important economic installations of the enemy in coastal areas and cause guaranteed devastating damage to the country’s territory by creating wide areas of radioactive contamination, rendering them unusable for military, economic or other activity for a long time”, the document says.

The weapon is known as a “nuclear mole,” and it’s an underwater drone that carries a nuclear warhead, then burrows into the seabed floor off the coast of the target country. Once buried into the sea floor, these nuclear weapons can be remotely detonated to cause a massive tidal wave that would wipe out coastal cities in minutes.

I have estimated that a series of these weapons could be detonated in a timed sequence that multiplies the amplitude of the tidal wave, causing a much larger and more devastating wave than any single weapon by itself.

In addition to the physical destruction that could result from such a weapon, the tidal wave would contain radioactive sea water, making it a “dirty bomb” in addition to the physical destruction. The “dirty bomb” aspect of such a weapon would deposit deadly concentrations of radioactive isotopes across the affected cities, leaving behind a toxic legacy of radioactive elements such as iodine-131, cesium-137 and various isotopes of uranium and plutonium, both of which have far longer half lives than iodine (approx. 7 days) and cesium (approx. 29 years).

Washington D.C., New York City, Philadelphia and Boston are all highly vulnerable to this weapon system, as they sit very close to the U.S. coastline and are well within reach of nuclear-initiated radioactive tidal waves.

Russia is at least a decade ahead of the U.S. military in weapon systems innovation

Russia has also developed many other highly innovative weapon systems that are years ahead of the U.S. military, reports Dave Hodges at The Common Sense Show. These include the “Plasma Fighter Jet” that fires a plasma weapon, the “Naval Proton Gun,” the Krasuha-4, a mobile electronic warfare system, and the S-400 Triumph, a highly advanced anti-aircraft system that can track 300 airborne targets and fire surface-to-air missiles to almost any imaginable aircraft height, including 40 miles of altitude (essentially low Earth orbit).

The U.S. military, meanwhile, was forced under Obama to focus on transgender rights and twisted, Left-wing social experiments rooted in feminism and LGBT agendas rather than battle readiness. America’s military, in other words, has become a liberal “safe space” while Russians’ military has become a dangerous fighting machine… which is, of course, the entire point of a military force.

If this isn’t immediately turned around under President Trump, America’s ability to fight and win a conflict with Russia (or China, for that matter) is seriously in question. This in no way condemns the fine men and women in the military itself, who despised Obama’s pathetic policies. The spirit of our troops is fully intact, and they are ecstatic that Hillary Clinton is not their Commander in Chief. But they need our continued support and investment in weapons systems that can compete with the innovation of Russia.