Trump supports ‘nuclear option’ to get his Supreme Court nominees approved, after Democrats used it for Obama’s court picks 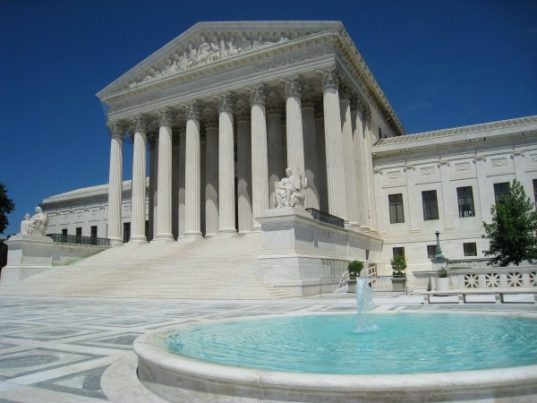 Because its members have historically prided themselves on being the more deliberative body, the U.S. Senate adopted a rule decades ago called the “filibuster,” which requires a 60-vote supermajority to pass legislation or confirm presidential nominees.

But it’s not a constitutional requirement, just a rule. And honestly, it was a rule adopted in a more politically civil time, when members of both major parties were far more willing to “reach across the aisle” for the common good, and to support the current president.

Bypassing or temporarily negating the rule is known as the “nuclear option,” and the last time it was done was just a few years ago when Democrats held the Senate majority and wanted to advance President Obama’s federal court nominees past Republican opposition. It was proof that the Democratic leadership in the Senate would go to any lengths to ensure Obama got his way.

Now, the Republican leaders in the Senate need to do the same thing to ensure that President Donald J. Trump’s nominees get past Democratic opposition; in this age of hyper political partisanship, there is no “reasoning” with the other side.

And in fact, as the Washington Examiner pointed out, Trump backs the nuclear option as a means of getting his nominees to the U.S. Supreme Court approved.

“Yes, I would,” Trump told Fox News’ Sean Hannity when asked if he would want Senate Majority Leader Mitch McConnell to use the nuclear option. “We have obstructionists, these are people that don’t want, I think, what they did to [attorney general nominee] Jeff Sessions, who’s a great man and a wonderful man, and then they delayed it another week because they have a one week delay option. That’s not fair to a man.” (RELATED: See what the Trump administration is focusing on today at WhiteHouse.news)

While Trump would not disclose to Hannity his pick to fill the seat of the late Justice Antonin Scalia, who was a constitutional originalist, he did say that he has nearly finalized his choice.

“I have made my decision pretty much in my mind, yes,” Trump said. “That’s subject to change at the last moment, but I think this will be a great choice.”

But for some reason, McConnell doesn’t agree, and has said that he isn’t ready to use the nuclear option.

In a separate report, the Washington Examiner quoted McConnell as saying he has no plans at the moment of invoking the nuclear option, even though most observers see Democrats obstructing any and all of Trump’s potential Supreme Court picks, which should come from a list of conservative federal and state judges the new president released last summer, as a way of winning conservatives to his campaign.

In an interview with The Hill, McConnell said that Senate rules had already been established earlier in the year, and would not be changing. “Senate rules are a matter for the Senate and a lot of other people have opinions,” he said.

“We’ve already adopted the rules for this Congress at the beginning of the year,” he added. “Basically we didn’t adopt any because in the Senate rules are permanent, unlike the House which every two years adopts a new set of rules. We don’t.”

Of course, rules and procedures that are not constitutionally required are subject to change. And despite the filibuster’s long history, Reid had no problem invoking the nuclear option with his Democratic majority, as the Washington Post reported:

“Democrats used a rare parliamentary move to change the rules so that federal judicial nominees and executive-office appointments can advance to confirmation votes by a simple majority of senators, rather than the 60-vote supermajority that has been the standard for nearly four decades.”

At the time, Reid said the chamber “must evolve” beyond parliamentary roadblocks – politicalease for, “I am doing this so that my president can get his way.” (RELATED: Find out who is attacking your liberty today at Freedom.news)

Obama, of course, praised the move, and it further proved that when it comes to Democrats wanting to get their way, the ends justify the means.

The former president was right about one thing, though, when he complained to the media that Republicans used the filibuster as a “reckless and relentless tool” to block his nominees. He also talked about a “pattern of obstruction,” meaning, partisanship was getting in the way.

So be it. McConnell should do what the president and millions of Americans want, and use the Democrats’ own tactics against them.

J.D. Heyes is a senior writer for Natural News and News Target, as well as editor of The National Sentinel.