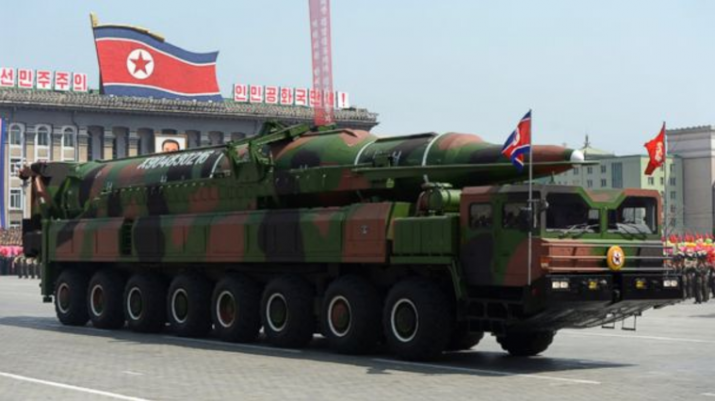 After eight years of apologies, appeasement and bending over backward for our enemies, it’s safe to say that Barack Obama left this country significantly less safe than it was when he first stepped into the Oval Office. The southern border has remained wide open, allowing gangs and drug lords to freely enter and leave the United States as they please. China has been on the move as well, relentlessly expanding its authority over more and more areas in the South China Sea. The Islamic State was essentially given the green light to grow and expand when Barack Obama improperly pulled our troops out of the Middle East, and now this form of violent extremism has spread not only through countries like Iraq and Syria, but also within the United States.

And then, of course, there’s North Korea, lead by the tyrannical, egotistical psychopath Kim Jong-un. North Korea has been on the move for several years now, repeatedly threatening to attack the United States and take as many innocent lives as possible. Just a few days ago on July 5, for example, the Korean Central News Agency (KCNA) cited Kim Jong-un as saying that the intercontinental ballistic missile test was a “gift to American bastards.”

According to the KCNA, Kim Jong-un watched the testing of the missile himself and said “American bastards would be not very happy with this gift sent on the July 4 anniversary. We should send them gifts once in a while to break their boredom.”

What is made abundantly clear right from the start is that Kim Jong-un is in way over his head. North Korea pales in comparison to the military strength of the United States, but that doesn’t mean that we shouldn’t take them seriously.

The threat made to the U.S. after the intercontinental ballistic missile test on July 5 certainly wasn’t the first time the North Korean government has made public comments about the annihilation of their enemies, and it won’t be their last either. In response to our country’s push to enact stricter sanctions on North Korea, for instance, KCNA quoted a foreign ministry spokesman as saying, “Should the UNSC adopt another ‘resolution on sanctions,’ this will trigger corresponding measures by the DPRK and (the North will) respond to the ‘resolution’ with its act of justice.”

The report went on to say that the successful test of North Korea’s intercontinental ballistic missile “has fully demonstrated the will and capability of the DPRK (Democratic People’s Republic of Korea) to annihilate the U.S. in a single blow to the very heart of its mainland in case it fails to act with discretion.”

Unlike Barack Obama, President Trump actually appears to be taking these threats seriously, and is making it known that there will be consequences if North Korea continues to threaten the homeland. At a news conference in Warsaw, Poland earlier this month, Trump said that while he generally doesn’t like to talk about his plans and strategies with respect to foreign policy, he does have some “pretty severe things” that are being considered, adding, “I don’t draw red lines.”

While President Trump certainly isn’t perfect (no president is), it is a relief to see a commander-in-chief that is finally taking on an aggressive role and confronting our enemies in order to keep the American people safe. Whereas Barack Obama spent his entire eight years in office bowing to other leaders and apologizing on behalf of the western world, President Trump is finally beginning to restore America’s firm but fair foreign policy strategy, which the late Ronald Reagan referred to as “peace through strength.”