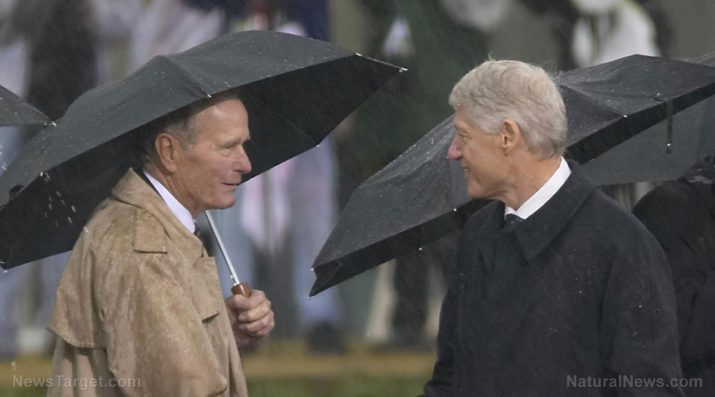 As the disgustingly dishonest “mainstream” media continues to hammer President Donald J. Trump over his refusal to take the ‘military option’ off the table if North Korea continues its nuclear and ICBM development, it’s a great time to remind those hypocrites they were silent when a Democratic president was doing the threatening.

That would be none other than Bill Clinton, the man who threatened ‘fire and fury’ long before Trump and whom you could argue is most responsible for the dangerously escalating situation Trump currently faces (even Clinton’s VP, Al Gore, agrees with that statement).

As The Gateway Pundit reminds us, Clinton made a similar threat to destroy all of North Korea in 1994. During a visit to the DMZ, he said it would be “pointless” for Pyongyang to develop nuclear weapons because if they ever used them against the United States (or anyone else), “it would be the end of their country.”

Then, of course, there was that time when President Obama issued a similar threat to the NorK’s, as reported by The Telegraph.

“We could, obviously, destroy North Korea with our arsenals,” Obama said April 2016, in response to reports at the time claiming that Pyongyang test-fired a submarine-launched missile.

But when Trump makes similar threats (and appears ready to back them up), well….what a warmonger! He’ll kill us all! (Related: Unhinged: An Alt-Left co-leader of the Democratic Party thinks the North Korean leader is ‘more responsible’ than Trump.)

Another thing Trump has been criticized over is the deployment of missile defenses in and around South Korea. But Obama talked about that, too.

“One of the things that we have been doing is spending a lot more time positioning our missile defense systems, so that even as we try to resolve the underlying problem of nuclear development inside of North Korea, we’re also setting up a shield that can at least block the relatively low-level threats that they’re posing right now,” he said.

Of course, neither Clinton nor Obama actually had any intention of following through on their threat. And in Clinton’s case, he actually aided in Pyongyang’s nuclear development.

Americans were assured decades ago by Clinton and his administration that Pyongyang would never threaten us or our allies with a nuclear weapon because of a “deal” he struck with current leader Kim Jong-un’s father, Kim Jong-Il. Under the guise of the 1994 “Agreed Framework” between the U.S. and North Korea, Pyongyang’s nuclear development was supposed to have been frozen.

“Left unconstrained, the reprocessing facility would have enabled North Korea to separate substantial quantities of weapons-grade plutonium from the spent fuel removed from its operational graphite-moderated reactor,” the Nautilus Institute for Security and Sustainability said in a 2003 report. “Had its ongoing activities not been halted, North Korea would have ultimately developed the means to fabricate significant numbers of nuclear weapons, as well as enable Pyongyang to market weapons-grade plutonium to other parties.”

Well, as it turned out, Pyongyang did continue to produce weapons-grade plutonium — he cheated on the agreement, in other words, even pulling out of the nuclear Non-Proliferation Treaty (NPT) in 2003, becoming the first nation to ever do that. Why? Because the elder Kim wanted to continue building nuclear weapons.

Even former Clinton administration Energy Secretary Bill Richardson, who was involved in the 1994 discussions, admitted in 2006 the North Koreans cheated, despite the fact that the U.S. provided Pyongyang billions in U.S. taxpayer-financed aid, as we agreed to do.

It’s one thing to hit Trump over political differences of opinion. But it’s unacceptable to essentially blame him for the current crisis involving North Korea, considering three presidents before him — beginning with Clinton’s “deal” — ensured this mess fell to him to deal with.

Instead, they merely kicked the can down the road.